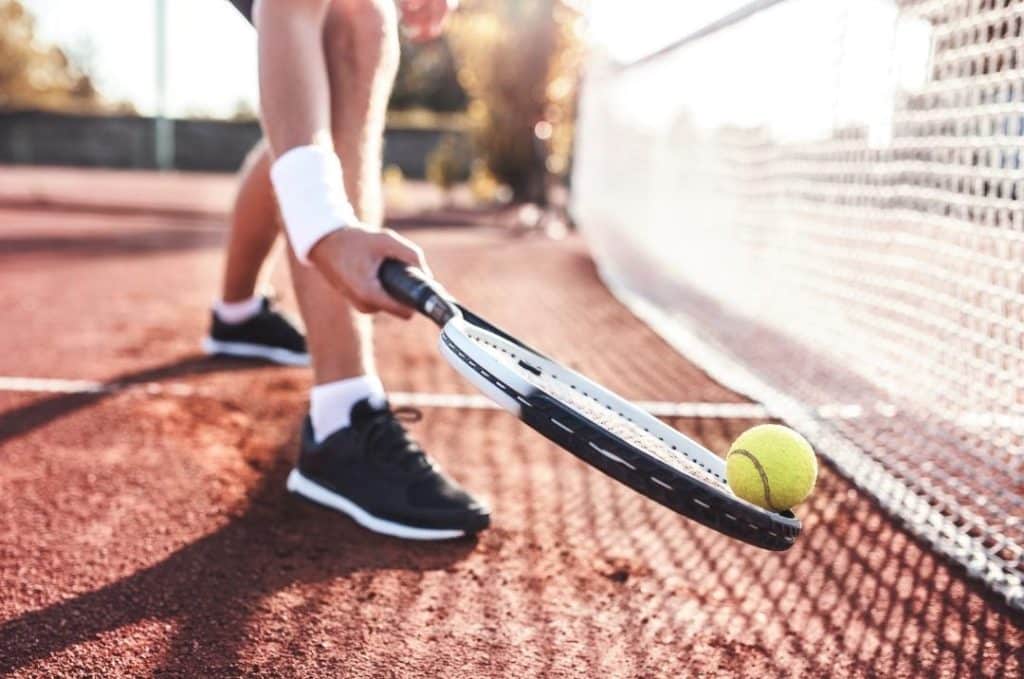 Tennis is a game that people have played for hundreds of years. It started when French monks played Jeu de paume in the 1300’s.

Some people think that the origin of tennis started before that! They believe that the Egyptians and Arabs should be credited for modern day tennis and the history of tennis was triggered by these people.

So where do you think the true origin of tennis came from?

Origin Of Tennis And Beyond!

There is little dispute that the French monks used Jeu de paume to play for entertainment during religious ceremonies.

A ball was hit over a string to another person.

As they served the ball to the other player, the monk would shout “Tenez” meaning something like “Take this”. The monks started playing with balls. This became very popular with French Kings and nobles. Tennis history took big leaps in the 1500s to 1700s.

Gloves to hit the ball were invented. Then tennis shoes appeared on the market. A paddle-shaped racquet was invented which made it easier to play with a better ball.

For some reason, in the 1700s, people stopped playing tennis. But then in 1874 Major Walter Clopton Wingfield started a new game. He was having a party at his estate and he had no idea how much it would spread. In under a year, courts were being made in the U.S., China, Russia and Canada were making equipment for tennis players to use.

Major Walter Clopton Wingfield gave up on controlling the rapid expansion of the sport and then gave it to the All England Club. The club made some changes, and we began playing Wimbledon Tennis History.

Tennis has changed history. History has been changed by this sport. History will be changed again because of tennis.

King Louis X from France dies during a game of “jeu de paume.” People keep on playing the game.

A former British officer named Walter Clopton Wingfield brings back the history of tennis and tries to patent it. He does a pretty good job at getting people to buy his equipment for 5 pounds each. But he gives up on the name “Sphairistike” because no one can pronounce it.

One of Wingfield’s boxes is sent to America and the first game is played in New York.

Spencer Gore won the first-ever Wimbledon Title. That was when Wimbledon Tennis began.

The Olympic games include tennis as a sport. It is one of the most important sports in the Olympics.

Dwight F. Davis decides to challenge England to a tennis match. It is called the Davis Cup because he went to Harvard University.

The Australian Open is a tennis tournament. It was first used in 1905.

The International Lawn Tennis Federation is set up to make sure there are four major tournaments. Wimbledon, U.S Open, Australian Open, and French Open.

Suzanne Lenglen from France made tennis fashionable in the 20th century. People thought she was a great player and they liked how she showed off her athleticism and balance in the game.

The French renamed their stadium after a hero. They also won the Davis Cup this year.

Two British people won the titles. It has been a while since then.

Wimbledon tennis club was hit by a bomb. There were 1000 seats lost.

Jack Kramer won Wimbledon in 1947 and now he created the World Tour. Players can travel around playing tournaments and winning money.

Maureen Connolly is the first woman to win all of the Grand Slam tournaments in a year. Unfortunately, right after her fourth title she hurt her legs and had to stop playing tennis.

The Australian Rod Laver won Wimbledon by playing tennis. The stadium in Australia where people play tennis was later named after him because he had great success.

Tennis is an open game. No one can be excluded. All players are allowed to play, no matter what their status is.

Bournemouth hosts the first ‘open’ tournament. Ken Rosewell wins the tournament, which was later won by him again, the French Open.

In the past, players who tied would play a really hard point to try and win. The player with the most points would win.

A ranking system is used to put players in the tournaments. Billie Jean King’s match had 30,000 spectators.

She won the Women’s title. The first tennis museum also opened in 1977.

Borg beat Mcenroe in the longest tie-break in the history of tennis. Mcenroe had 7 chances to win but Borg got 18 points. Mcenroe was mad about his loss.

Sweden made a clay court and hosted the Davis Cup on it.

Boris Becker became the youngest player to win a Grand Slam. He made Wimbledon tennis history when he won the tournament at only 17 years old!

Navratilova retired with 167 championships under her belt.

Pete Sampras (the best player in the history of tennis) retired from playing tennis.

Roger Federer is new to the tennis scene and has already won 3 out of 4 Grand Slams. He’s on track to break all of the history records for tennis.

Tennis has been around for centuries and the sport continues to evolve. It’s a very popular pastime that draws spectators by the tens of thousands every year. With so many tennis tournaments happening in different parts of the world, it can be hard to keep track of all these major events going on at once. From Wimbledon to Roland Garros, here are some important historic moments in tennis history you may not know! Let me know if there are other important historic events for tennis I missed out on or need clarification about–I’m happy to help!